The store will not work correctly in the case when cookies are disabled.
Menu

HiFix have put together a great selection of award winning package deals carefully chosen to match each component to produce incredibly good sound quality.  We have designed all our Hi Fi Package Deals for their ability to work together in a balanced way reproducing enhanced levels of sound quality, these package deals offer great value for money and savings over their individual prices.

Yamaha is introducing two flagship separate components that stand at the top of the AVENTAGE Series of ultra-high performance components. They are the most precise expression of the AVENTAGE concept, which combines fine craftsmanship, unparalleled sound quality, unequalled sound realism, innovative technologies and enhanced controllability...

Join us on Pinterest! We have been adding images from around the world and from our website displaying some of the worlds finest Hi Fi products, with more added daily, new brands, and furthermore some of the best moments from our HiFix store in Coventry...

More details over on our forum here.

It doesn't seem like 5 minutes ago since I was writing up about Onkyo's new THX pre/power and Bluray player on these forums. But with the emergence of 3D and the 'version of HDMI we're not allowed to mention', Onkyo had to update. So out goes the old pre/processor and Bluray player, and in comes the new. The PAMC5500 remains the same. We're not on to 3D audio yet. :D

The BDPS808 Bluray player adds 3D playback over the old 807.

The 9.2 channel Networking THX Ultra 2 Plus PRSC5508 processor replaces the old 5507, and adds 3D pass through, and a new version of Audyssey's existing DSX, we're told.

The matching PAMC5500 9 channel THX Ultra 2 power amp remains the same, and uses Onkyo's WRAT amplification technology.The 5500 has 220wpc on tap, and should be able to drive pretty much any speaker you care to throw at it.

As mentioned before, the PAMC5500 power amplifier remains the same.

The above photos are of the current PRSC5507 and BDPS807 - new images will be added when we get them. But let's face it, they'll look the same! More details will be posted when we have them.

The Yamaha RXV1067 is a 7 channel receiver capable of 105wpc (8ohms), with assignable amplification for biamping. All the usual decoding capabilities of today's receivers are present and there are no less than 8 HDMI inputs, and 2 outputs. The HDMI's are 1.4a, CEC compatible (with Audio Return Channel), which can also be selected between even when the receiver is in standby. Instead of the usual 4 Scene choices on most Yamaha receivers, the 1067 gives even more with 12 Scene choices, all with variable parameters.

You have access to thousands of internet radio stations via it's DNLA 1.5v certified internet connection, which also allows Receiver Management. Streaming of WAV/MP3/WMA/AAC/and FLAC 96/24 files is also possible, as well as Web Browser Control via PC or PDA. A front mounted USB port allows MP3 connection, and the 1067 is fully compatible with iPods and iPhones via it's new optional YDS12 iPod dock. Wireless connction is also available via the optional YIDW10. The YBA10 also allows Bluetooth (A2DP) compatibility.

A full 7.1 multi-channel input is provided, as well as a full set of 7.2 pre-outputs.

Like the RXV1067, the RXV2067 is also a 7 channel receiver capable of 130wpc (8ohms), with assignable amplification for biamping, and, like the RXV3067, is built around an H shaped cross member frame for added rigidity. It also uses a symmetrical power amplifier layout, as well as a new heat sink with anti-vibration and anti-thermal properties.

The video side adds an HQV 'VDH1900' video chip for SD and HD video, with variable parameters and 6 preset memories for ease of use. The Burr Brown DACs are built on Pre Ground circuitry.

A second remote control is provided with the 2067 for easy multi-zone control, and the main 2067 remote also adds a display. A third zone is catered for over the 2 zones of the RXV1067. An enhanced version of Yamaha's YPAO room equalisation also gives the RXV2067 a bunk up over the RXV1067.

Again, a full 7.1 multi-channel input is provided, as well as a full set of 7.2 pre-outputs.

The RXV3067 is also a 7 channel receiver which boosts the power output considerably over it's little brothers to 140wpc (8ohms), and is built around the H shaped cross member frame used in the RXV2067, but adds a double bottom construction for added rigidity, which is used in the DSPZ11.

The RXV3067 adds the use of an extra high capacity block capacitor. It's Burr Brown DSD1796 DAC's use their own Pure Gound circuit.

The RXV3067 adds the capability of 4 zones, controllable via the supplied second remote control.

A full 7.1 multi-channel input is provided, as well as a full set of 7.2 pre-outputs. With an external power amplifier, the amount of channels can be expanded to 11.2.

We now have the new Monitor Audio Bronze BX range on demo in store.

Later this year, Marantz will be releasing a new AV pre/power. The AV7005 and MM7055 will be a visual cross between the current AV8003/MM8003 and their Premium product range, with their nifty little circular front panel display.

The AV7005 will have 6 HDMI inputs, with 2 HDMI outputs, all ready for 3D. It will include full HD audio processing with Pro-Logic IIz, and have Audyssey MultiEQ XT with Audyssey DSX room EQ processing. It will be fully DNLA 1.5 compliant, and incorporate an internet radio, with full suppoer for vTuner and Napster. It will also have a full 7.2 XLR output. It'll even include a phono stage! 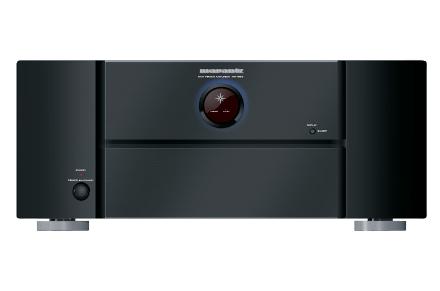 The MM7055 5 channel power amplifier which can be connected to the AV7005 via XLR. It is 140w per channel. It will have a power meter display on the front, presumably in their Premium style.

An MM7025 2 channel power amplifier will be available to add to the above to make the system 7 channel.

All will be available October 2010. More details over at our audio forum

Yamaha are adding two new receivers to their current line up.

The 7.2 channel RXV667 supports the usual HD audio formats, uses Yamaha's own YPAO room equalisation and Scene feature, with 1080p upscaling. It also uses Yamaha's DSP 3D mode, which with front effect speakers produces a much larger soundstage than normal AV receivers. Six HDMI inputs (useable when in standby) should cover enough sources for most people, and with full 7.2 pre-outputs and 7.1 input, it will also incorporate upgrading by adding a multi channel power amplifier, or adding sources with their own internal decoding.

The RXV767 adds a second HDMi output in order to run two displays. There is also an audio input assign capability for HDMI and component inputs for added versatility.

The new YDS12 iPod dock can be added to take full advantage of iPods, and the YID-W10 adds wireless transfer of music from an iPod. Audio streaming is possible via the YBA10 wireless audio receiver. All of these can be used with the above AV receivers.

Yamaha are also introducing a new Bluray player, the BDS667. Fully compatible with BD Live and Bonus View, the player will also play Jpeg HD, WMV, MP3, DivX HD, and is fully DNLA Client compliant. The player is a full1080p/24Hz output, and it's HDMI output is full Deep Colour compatible. The player has a front mounted USB port for video/audio playback of external memory devices.

For more new models, check out our forum at Hifix Blog

Onkyo are about to release the TXNR1008 THX Select 2 Plus 3D compatible home theatre receiver, and as usual, Onkyo are leading the way with some new, genuinely useful features, keeping them one step ahead of the competition.

The TXNR1008 is a full HD audio decoding 9.2 channel AV receiver, with HDMI 1.4a 3D compatibility. This 3 zone receiver is THX Select 2 Plus certified, incorporating Faroudja DCDi video processing, Audyssey Multi-EQ processing (with Audyssey Dynamic Voume) and Audyssey DSX. It is also equipped with ISF video calibration. It is fully DLNA 1.5 and Windows 7 compatible, and has full internet radio access, as well as having access to Last.FM and Napster. The TXNR1008 is rated at 180w into a 6ohm load.