It doesn't seem like 5 minutes ago since I was writing up about Onkyo's new THX pre/power and Bluray player on these forums. But with the emergence of 3D and the 'version of HDMI we're not allowed to mention', Onkyo had to update. So out goes the old pre/processor and Bluray player, and in comes the new. The PAMC5500 remains the same. We're not on to 3D audio yet. :D

The BDPS808 Bluray player adds 3D playback over the old 807.

The 9.2 channel Networking THX Ultra 2 Plus PRSC5508 processor replaces the old 5507, and adds 3D pass through, and a new version of Audyssey's existing DSX, we're told.

The matching PAMC5500 9 channel THX Ultra 2 power amp remains the same, and uses Onkyo's WRAT amplification technology.The 5500 has 220wpc on tap, and should be able to drive pretty much any speaker you care to throw at it. 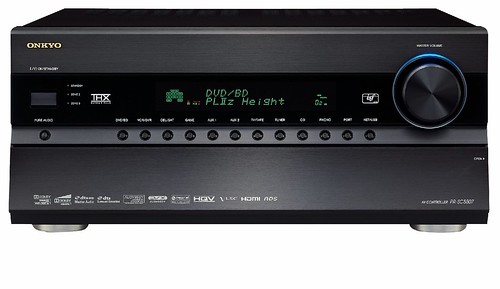 As mentioned before, the PAMC5500 power amplifier remains the same.

The above photos are of the current PRSC5507 and BDPS807 - new images will be added when we get them. But let's face it, they'll look the same! More details will be posted when we have them.