KEF Audio have announced an active wireless version of the popular award winning LS50 speaker. The KEF LS50 Wireless speakers benefit from all the technology engineered into the LS50, from the oval flexiport through to the UniQ driver array.

Now they’re active. So no more bulky amplifiers. Just plug your sources directly into the LS50s and away you go. 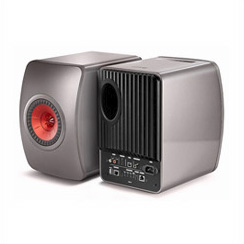 The benefits of active speakers are numerous. Firstly, an electronic crossover replaces the conventional passive one, resulting in greatly reduced distortion and improved efficiency. Each drive unit connects to its own independent, tailor made amplifier, which directly powers each drive unit. The digital DSP of the electronic crossover corrects phasing and timing issues. Also, speaker limits can also be controlled, reducing the possibility of damage.

The KEF LS50 Wireless loudspeakers allows the connection of two digital products, one optical and one USB. An analogue input can cater for turntable users. Bluetooth provides connectivity for phone and tablet users.

The KEF LS50 Wireless loudspeakers let you stream any network based music to them as well. This adds extra value and convenience to an already excellent package. Any music streaming service based on your phone or tablet can be transferred via Bluetooth.

From volume through to advanced set up, an Android or Apple app allows full control of the LS50 Wireless speakers. A remote control is also provided.

The video below shows the basic idea behind an active loudspeaker.